Single-strategy assets under management in the HedgeNews Africa database amounted to $5.5 billion as at the end of 2009, including both African and South African mandates, with 170 funds reporting for the purposes of this survey. In South Africa, assets under management in hedge funds rose 10% in the 12 months to the end of 2009 to R33.1 billion (US$4.41 billion), compared with R30.09 billion as at the end of 2008, mainly accounted for by positive performance during a dry spell for new inflows into the industry.

The steady asset base is commendable given the far more pronounced disruptions that occurred globally in 2008 and early 2009, both in performance and through investor withdrawals. Global hedge fund assets ended 2008 at $1.83 trillion, dipping to $1.7 trillion in mid-2009 before clawing back to end 2009 at around $1.85 trillion, according to global data provider Hedge Fund Intelligence. 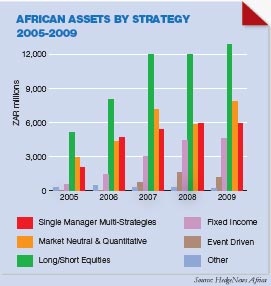 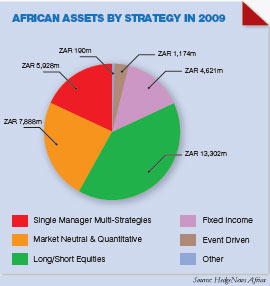 The domestic industry has, however, lagged behind since the fourth quarter of 2009, with significant new inflows resuming globally in the last few months of the year after all strategies bounced back strongly in 2009, except for managed futures, which was the star performer in 2008. The lag can be partly attributed to the conservative nature of the domestic investor base, with big global allocators more attuned to the benefits of hedge fund investing over the long term.

The South African number includes all funds in the HedgeNews Africa database, as well as funds that do not report returns to us but which have revealed their AUMs for this research, with 137 funds participating in the survey, including dollar structures of domestic funds. The total includes assets in segregated accounts but not African mandates managed by South African-based managers. It also excludes absolute return mandates or hedge fund “lite” strategies, such as the Allan Gray Optimal Fund, which had R2.77 billion under management as at the end of December.

HedgeNews Africa takes a conservative approach to calculating the total assets under management, preferring to err on the side of caution. It must also be noted that while healthy as at the end of 2009, there have been reported outflows in the South African space in the first quarter of 2010 – predominantly from one parastatal pension fund advised by a domestic consultant, estimated at less than 4.5% of total AUM.

Domestic fund of hedge funds remain the dominant investors in the South African space by some margin, accounting for almost 69% of assets under management, a rise of 6.4% from the year before. While this number is believed mostly to comprise domestic pension fund allocations, there has been an increasing push to attract private clients assets, many of whom allocate via fund of hedge funds rather than through direct investment in hedge funds.

Foreign investment in the South African hedge fund space remains small, accounting for less than 2% of assets under management, despite promising signs as more funds launch dollar-based structures. Some funds with dollar-based structures saw global investors withdraw at the end of 2008 amid the global liquidity crunch, and these investors had yet to reallocate as at the end of 2009.

Despite a difficult period, the industry showed a healthy level of new launches in 2009. In South Africa, there were 16 new fund launches during the year (excluding new dollar structures of existing funds), down from 19 the previous year, although two of those funds closed while still in the incubation phase. South African managers also accounted for five new African mandates of the nine that launched in 2009, showing an increased drive from locally based managers put their skills to work elsewhere on the continent.

In addition, around 10 new fund of fund products came to market in South Africa, accounting for two new multi-managers entering space as well as new products from established houses catering for different client requirements. Two Africa-focused fund of funds were launched. Eleven funds formally closed during the year, the same number as in 2008, an attrition rate of around 7%. Most were the result of under performance affecting their ability to raise assets, with no blowups reported during the year. It must be noted, however, that a handful managers not included in that figure returned to managing internal funds,effectively closing to outside investors.

Amongst single managers, assets in long/short equity grew by 11% during the year, rising to R13.3 billion, accounting for 40% of assets under management. Market neutral and quantitative strategies received the most new inflows during the 12-month period, rising 35.8% to R7.8 billion, or 23.8% of the industry total, with the strategy benefiting from consistent performance in both up and down markets.

Fixed income grew by 3.5% to R4.6 billion, with this category positioned for further growth as investors get to grips with increasing diversity among different mandates and convincing returns. Assets in single manager multi-strategies dipped by 0.1%, with a growing divide between bigger funds in the category and smaller players.

Assets in event-driven funds dropped by 27.8% to just R1.1 billion, as economic conditions made life tough for this relatively new addition to the market. Assets in the “other” category, which includes managed futures funds as well as a new launch in the distressed area, dropped 35% as investors proved reluctant to back more esotericstrategies given a lack of fresh capital coming into the industry. 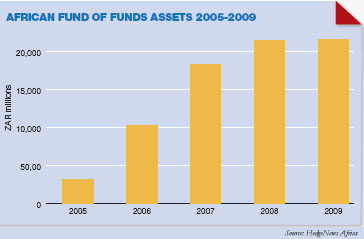 Besides liquid CTA strategies, many other funds that fall under this category have limited capacity given their niche nature, and whilst offering exciting opportunities for investors they are not designed to achieve significant scale in the short term given market constraints.

“Given the impressive performance seen in Africa so far in 2010, mandates are expected to grow significantly during the year”

While assets remained steady in the HedgeNews Africa universe during the year, the overall AUM number hides some vastly changing fortunes at underlying funds, in line with a global trend for the big to grow bigger as investors back institutional-grade managers with proven records. Funds that have delivered consistently with sound infrastructure and well-rounded investment teams have seen their assets increase healthily over the period, while those on the other end of the spectrum have suffered withdrawals.

According to our records, about 33% of South African funds have assets under management of less than R50 million, although this number is somewhat misleading as it includes funds from established houses, most of which have already achieved scale across their product ranges. Less than 7% of South African funds have assets under R50 million and form the main business of the management company, including new launches that still need to build track records.

Assets under management in African funds remained small in 2009, at around $1.2 billion. This number includes actively managed long-only portfolios given their nascent nature of the African markets, but does not include the assets of some established African investors such as Blakeney Asset Management, who remain firmly under the radar and are believed to have as much as $1.5 billion invested in the continent. Smaller African managers were also reluctant to reveal assets, particularly as 2009 was another tough year performance wise as many African markets failed to participate in global market recovery.

The numbers also do not reflect African allocations in global funds, or a growing number of Middle East North Africa hedge funds, whose main focus in typically the Middle East. Dedicated African fund of hedge fund investors now account for less than $100 million under management, with two new providers coming to market in 2009, as the continent remains underrepresented in foreign investor portfolios. Given the impressive performance seen in Africa so far in 2010 as well as a revival in investor interest, with African growth prospects amongst the most attractive in the world right now, African mandates are expected to grow significantly during 2010, presenting a different picture 12 months from now as the continent emerges on the radar of global allocators.

Among global mandates, managers based in South Africa (or those that also have investment teams advising on ex-SA mandates from their South African offices) account for a further $500 million under management in global strategies, including emerging market portfolios and specialised commodities mandates. Copyright. HedgeNews Africa.